Overcrowding in the camp, long waits for hygiene and food and our growing medical team

The heat of the summer begins to dissipate, but the conditions on Samos continue to deteriorate. The number of arrivals on the island has increased dramatically over the last year, and there are now more than 6000 refugees on the island. Samos’ only hotspot, a few minutes’ walk from the bustling tourist city of Vathis, was built to house a maximum of 650 people. One can imagine what the conditions must be like for those many refugees crammed into such a small space. Thousands live in “The Jungle”, an area lying adjacent to the camp, where refugees must purchase their own tents. But now even The Jungle no longer has room, and refugees can be found living on the streets of Vathis. Soon problems with local population are bound to emerge as they can only feel overwhelmed.

The deteriorating situation has had a deleterious effect on the health of the refugee population. Refugees complain about the inadequate food and water, the lack of access to toilet and shower facilities, the lack of hygiene and the constant waiting that the overcrowdedness has led to. Refugees often rise at two o’clock in the morning and stand in line for seven hours to receive a small pastry and a juice box. They don’t have access to a proper meal everyday, which obviously get them frustrated and desperate, even more for the families with kids, and the lack of proper food tend to weaken their immune system.

“All we do is stand in line. All day long. For food, for the toilet, to see the doctor. It’s unbearable,” a young Afghan man confided.

The situation is exacerbated by the fact that refugees often face an uncertain future. While some have already spent over a year on the island, many others must wait until 2020 or even 2021 before they are allowed to present their case for asylum before the European Asylum Support Office.

The worsening situation on the island has had consequences for the Med’Equali Team, as the clinic now regularly sees in excess of 150 patients per day. But our team of hard-working doctors, nurses, medical students, receptionists and translators is prepared for this influx of patients.

The clinic is open daily (except Thursdays) from 7 a.m. until 5 p.m., but our staff regularly stays later to handle the additional load. 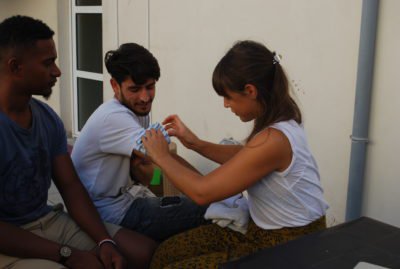 Quite luckily for Med’Equaliteam, which celebrated its 1st anniversary this summer, the team has widened over the year, somehow matching a little the widening of the number of refugees. In the last months, the team has been made up of 5 doctors, 4 nurses, 2 medical students, 1 receptionist and a lot of translators, and we had week-long visits by a physiotherapist and a gynecologist, thereby providing services that are sorely needed by our refugee population. They are all coming from all around the world, dedicating themselves to the clinic despite the intense days and overwhelming needs. The team spirit stands strong, thereby becoming an awesome strenght for all the volunteers and enabling the team turnover to go as smoothly and efficiently as possible. Even though flexibility is still a highly needed everyday skill, the team has found its way and the clinic comes together nicely although by definition the days will always be challenging. 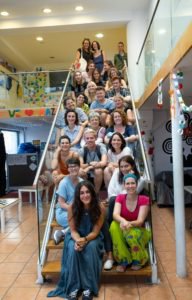